One of the attractions of foraging is that it is possible to find flavours and textures that are unavailable in the shops.  Most wild mushrooms are so complex in their relationships to the land, to the other organisms that share that space, that they are difficult or impossible to cultivate.  You might find penny buns or chanterelles at your local market, but they will be wild.

There are some mushrooms, of course, that can be cultivated and are grown commercially in huge numbers.  The enoki mushroom, for example, is a cultivated (and inferior) version of the wild velvet shank (Flammulina velutipes).  The most commonly bought mushroom, sold as button, white, or portabello, is an old cultivar of a wild mushroom (Agaricus bisporus).

In 1926, a Pennsylvania mushroom farmer found some mushrooms with white caps in one of his mushroom beds.  This was seen as more attractive than the then more usual brown colouring. Now nearly all shop-bought mushrooms come from this chance encounter with an ancient mutant.  One of the other most widely cultivated mushrooms is the oyster mushroom, and variations thereof, also often sold as ‘wild’ (lies).

This recipe is not reliant on finding either oyster mushrooms or chestnuts in the wild, as you may forage for them in your local shop.  But it will be more satisfying if you do get out to the woods and search.

The oyster mushroom (Pleurotus ostreatus) can be found from summer through to the end of winter, and is fairly common. It grows mostly on beech, often in large tiered groups.  The top varies in colour from beige to an almost silver grey.  The stem is short, sometimes nearly non-existent, and the flesh is white and thick.  The gills are white.  Do still be careful and 100% sure, and use a good guide or three – a similar species, angel wings (Pleurocybella porrigens), is now thought to be potentially seriously toxic. Older specimens of oyster (as with many mushrooms) tend to be a bit of a playground for maggots, so check before you pick.

They have a pleasant taste and firm slightly slippery texture. They are ideal for stir-fries, dry well, and work nicely in stews or casseroles, as they hold their shape even with prolonged cooking.

Splendidly, oyster mushrooms are carnivorous, using a toxin in some of the mycelium (the majority of the organism that exists buried out of sight) to stun passing nematode worms who are then sucked dry.

The wild, or sweet, chestnut tree (Castanea sativa) is not a native British tree, but was introduced here by those great importers, the Romans. It is now fairly common in woodland and parks, and can grow to impressive heights. The leaves are large, long ovals, with slightly pointed ends and serrated edges.  The nuts are encased in a sheath of thick spines, and there are usually three or more chestnuts inside.  The nuts themselves, however, seldom live up to the promise of the great tree on which they grow.

Usually October and November are the months for wild chestnuts, but regardless of timing they are often tiny, malformed things with little actual flesh.  Sometimes you do come across a good crop, more often later in the season when the seed has had time to fully develop, although the squirrels also know this. Be careful, as they’re very spiny, and require some work to remove them from their sheaths. 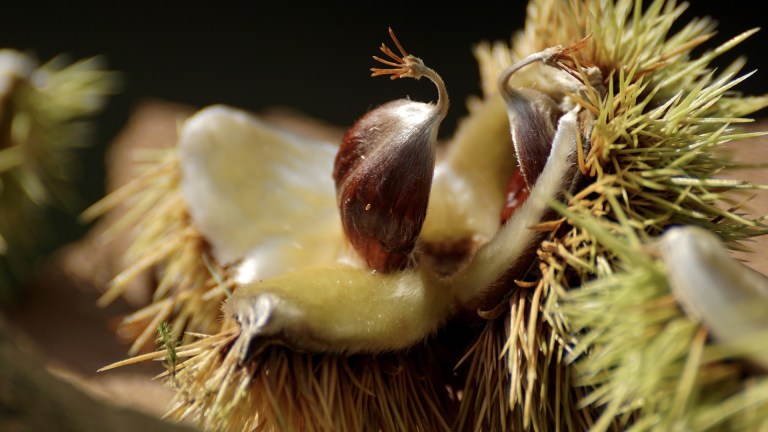 This soup is really velvety and savoury-sweet, with a lovely saltiness from the mushroom and bacon crumb. It takes a little while to prepare, but the extra roasting of some of the ingredients really does add to the depth of flavour.

Place the potatoes in a roasting tray with a couple of glugs of olive oil and the rosemary. Sprinkle over a pinch of salt and grind of pepper and put into a preheated oven at 180C for around 25 – 30 minutes, until starting to colour.

At the same time, place the bacon and ten good sized oyster mushrooms on a lined baking tray and pop them in the oven on a low shelf.  Keep an eye on them, you are looking to dry them out and make them crispy, without burning, which will depend on the size and fat/water content.  Probably around 15 minutes.

When the potatoes, bacon and mushrooms are ready, remove from the oven and transfer to a plate with some kitchen roll, to absorb any excess fat.  Meanwhile, pre-heat a big saucepan, add a good knob of butter (you’ll need more than you think) and, when it’s starting to fizz, add the chopped vegetables.  Fry on a medium-low heat until starting to colour.

Wipe and roughly chop the remaining uncooked mushrooms, and add to the pan. Let them soften a little, and then add the wine. Allow to reduce by about a third, then pour in the hot stock, the cream, and add the sage. Bring to a gentle simmer and cook for around 20 minutes.

Now to the chestnuts. If you have wild chestnuts, or have bought whole chestnuts, the easiest way to deal with them (as we don’t need them intact) is to rinse them, make a small slit in the side (or they’ll explode!) and roast in a hot oven for 25 – 30 minutes. Remove them from the oven, allow to cool a little (though not too much as they are easier to deal with when warm) then split in half with a knife and scoop the flesh into a bowl using a teaspoon (being careful to avoid any bits of shell or the brown membrane that surrounds the flesh). If you have bought pre-cooked chestnuts, then well done, you may skip this section.

Add 200g of the chestnut flesh to the soup, blend until very smooth, and set aside.

Now take 4 of the crisped rashers of bacon and the 6 of the dried mushrooms (save the rest), and blitz to a breadcrumb consistency in a food processer. You may find it is still a little wet, in which case return the crumb to the oven on a low heat until sufficiently dry and crumbly. Set aside.

To serve, warm the soup and check the seasoning (use a smidge of the bacon crumb when tasting as this will act like a seasoning when served, so don’t go overboard with the salt). Chop the remaining chestnut flesh and place into warmed soup bowls. Ladle in the soup, sprinkle on the bacon and mushroom crumb (to taste, which for me means all of it), and finish with the parsley, a crisp rasher of bacon, and a dried mushroom. As a final flourish, use a drop (and just a drop) of truffle oil on each bowl.

This article first appeared in a different form on Locavore Magazine’s website.

3 replies to On Chestnuts, Oyster Mushrooms, and Ancient Mutants