The bees are dying.

All was, or seemed, well.  We had weeks where the bees were busy busy.  Collecting nectar, the clover in the field surrounding the hive a-buzz with 40,000 tiny beating wings.  Bringing in pollen, little globes of yellow and orange and chestnut brown attached to their legs as they arrived home from their forays.  Building comb, first white then yellow, filled slowly with honey and brood, alien geometry.  All the wild carrot species were in bloom, along with plenty more mid- to late-summer blossoms, a feast for the eyes and the insects.  We fed the bees a little sugar syrup to help them build their winter stores, as we had installed the swarm later in the season than was sensible due to delays from the breeder, and they lapped it up on overcast days or ignored it on sunny days.

The weather has been changeable, very wet for a Burgundy summer, though with plenty of sun and heat interspersed with the storms.  This has limited the good foraging days for the bees (and for me, though it does mean mushrooms are popping up earlier than last year).  We have watched the bees intently, spending hours sat in front of the hive watching the comings and goings, trying to get a handle on what it all means, these waggles and leg-waves and circular flights.  They have been tolerant of our presence, only becoming antsy if we have taken friends to show them the colony and lingered too long.  All was, or seemed, well.

Then the daily activity on the landing board seemed to slow, little by little, until there were mornings, hot and bright, when the arrivals and departures were sluggish and sparse.  One afternoon, both of us in the field raking hay (wet, unusable, though we shall use it as a mulch for next year’s planned no-dig beds), there was a sudden fierce buzz. Approaching the hive, we saw hundreds of drone bees flying in tight loops.

Drone bees are the male bees; bigger, heavier than the workers, with domed eyes that meet at the top of the head like a crash helmet.  They have no sting.  They are the product of an unfertilised egg, meaning they have no father, only a mother.  If one traces back the number of genetic ancestors of a drone, a sequence is revealed; the Fibonacci sequence, that code that is found throughout nature, in the spiral of a shell, in the uncurling of a fern, numbers revealed in nature.  Drones have one job: to mate with a queen.  They do no foraging of nectar or pollen.  They do not nurse the larvae or tend to young bees.  They are all noise and sex.

Drones often fly in the afternoon, heading out to seek, and mate with, queens from other colonies, but we thought the number we were witnessing was rather large.  A quick look through the observation window revealed something worrying.  More drones, fewer obvious workers, and much more comb visible than normal, suggesting a general decline in numbers.  They were not dying of starvation, there was no obvious disease, no sign of varroa mites.  The possibility, which is today all but confirmed, was that we had lost the queen, that she had died, or been killed. When this happens, sometimes one of the worker bees will begin laying eggs, though these eggs are infertile, the worker never having mated (indeed she lacks the anatomy to do so).  These unfertilised eggs will only produce male drones, no workers, meaning that as the workers reach the end of their lifespans they are not replaced.  The population of the colony is not refreshed, the number of drones increases whilst the workers decrease. Eventually the hive becomes a male-only hive, and, as the males cannot reproduce or even feed themselves, they die.

The only way to confirm what was happening was to open the hive, which is not something recommended in natural beekeeping.  If we were to open the hive and see only drone brood, no worker larvae, this would be a definitive answer.  Our fear was that we might be wrong, that the queen may be alive and laying, and we were simply worrying because of our inexperience, bamboozled by the complexities of the bee society as we are.  Opening the hive, apart from being detrimental to the health of the colony, risks accidentally killing the queen.  Our very quest to save them might be their end.

We asked advice of other Warré beekeepers, which was mostly positive; the bees will be fine, don’t worry, keep an eye, don’t interfere.  So we did just that.  Watched.  Tried to not worry.  Watched and watched. 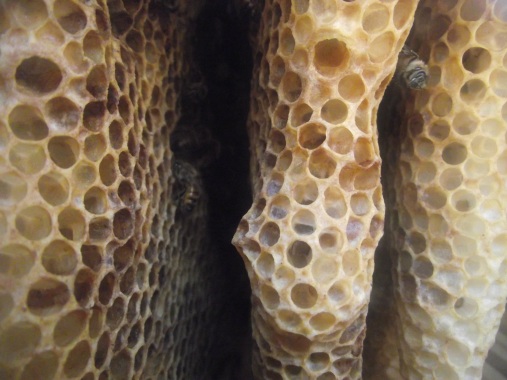 A month on and the numbers of bees have reduced to the extent that we could count them, if that were not a macabre and depressing thing to do.  No pollen at all is being brought in by the few workers who are still going about their business.  Too many drones, smaller than they should be, are hanging from the comb in the hive, doing nothing.  Wasps and, we think, bees from nearby colonies are robbing the hive.  We have reduced the size of the entrance to make it easier to defend, but our bees seem disinterested in war, seem to have accepted the siege is lost.  We continue to feed them, now supplementing the sugar with pollen for protein, but every day there are fewer and fewer bees, more tiny corpses, and ML and me look at each other and despair.  ML sits by the hive in the evening sun, swatting at invaders.  I visit the hive less and less; it is too sad.  It feels as if we are presiding over a dying planet, witnessing the end of the world, and this is true, for the bees.

Did we do something wrong?  Possibly.  Could we have intervened?  Yes, but our interventions would have been unlikely to succeed this late in the year, and we are of the mind that if, as seems inevitable, the bees are on their way out it should be because of the natural rhythm of things rather than a clumsy, misguided helping hand.  Are we wrong about all this?  We have talked it over for hours.  I am still unsure.  And it is too late, in any case. 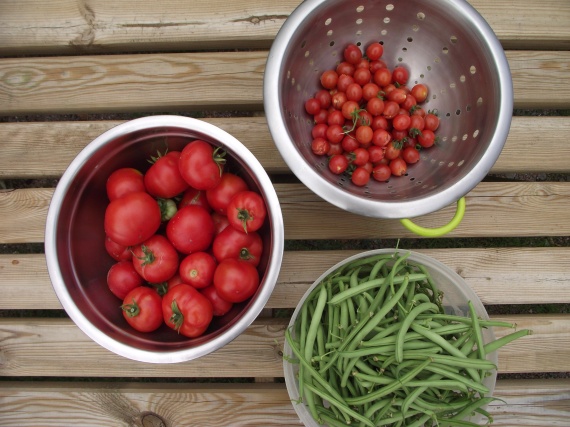 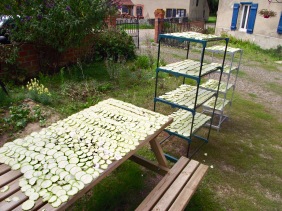 There are many positive things that have happened.  We have been laboriously dealing with a glut of tomatoes, green beans,  and courgettes.  We have canned the tomatoes, either simply chopped and cooked down, or then passed through a sieve and reduced to make a sweet, intense puree, and we have stored enough to last us until next summer. The courgettes we have frozen or sliced and dehydrated in the hot August sun.  Our aubergines and carrots have been a success, and a revelation in terms of flavour.  We have bought no vegetables for two months now, and have been eating well.  The chickens, odd birds, grumble and scratch and lay four eggs, every day.  This evening we are going to look at some sheep, with a view to buying two ewes along with their four lambs.  We’ll keep the ewes for breeding, and raise the lambs on for a year or so for hogget.  Our first meat animals, which raises a whole new set of questions and feelings. Sheep, less inscrutable than bees.  New lives coming in as others fade.

We will not give up.  We’ll start a new bee colony next year, learning from our observations and errors of this year to, hopefully, help create a strong colony.  This is our first real experience of failure, and it is not sweet.  But next year we will get it right.

The queen is dead.  Long live the queen.