Note: bees are complicated, wildly so.  I am not an expert, not even close, and much of what follows is knowledge I have gleaned from books and courses, and some is still controversial in the beekeeping world.  I have provided links to further reading for those that wish it.  I cannot take responsibility for external links.  I do not really see myself as a beekeeper.  I own a hive that bees live in. I am more of a bee-landlord, who will collect rent only if the tenants can afford it.

We had hoped the bees would arrive earlier.  We wanted to source a swarm locally, so the bees already knew their way around, where the best flowers were, and were already acclimatised to the weather and the landscape.  Sadly this proved impossible, so we ordered a swarm of bees with a mated queen from a breeder near Colmar, up by the border with Germany.  Inclement weather had delayed the swarm season; March became April, April turned to May, wild flowers bloomed and wilted away, and still we waited. 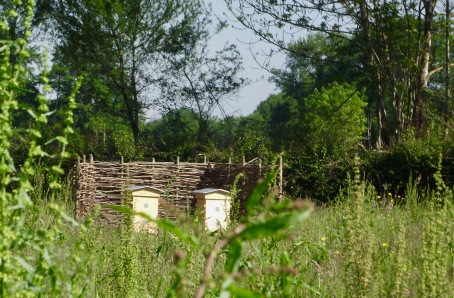 Last year we went on a weekend natural beekeeping course, when we were still living in Bristol.  Run by the hugely knowledgable and lovely Heather and Tim from Bee the Change , it was an inspirational couple of days, with a lot of biology, natural history, and tales of beekeeping traditions around the world, such as Polish tree-hives.  It really opened our eyes to the idea of beekeeping for the sake of the bees, not for honey.  Bee decline has been in the news for years now, with much being made of the use of neonicotinoids on crops.  Whilst this is almost certainly part of the problem, it is much more complicated than this.

The bee is a mystery that humans have tried to solve for millennia, and has been deeply involved in the folklore, religion, medicine, even politics, of societies from ancient Egypt onwards (perhaps even earlier).  For centuries it was thought (typically) that the queen was a king. It was thought that bees were generated, spontaneously, from the flesh of dead oxen.  There are still aspects of bee behaviour and biology that are not understood, though we manipulate and spray and confine and hurl chemicals about, and are flummoxed by colony collapse, by bees simply disappearing in their millions.

In natural beekeeping, chemical treatments are not used, the hive is opened as little as possible (if ever), honey is only taken if there is truly a surplus (if ever).  There is growing evidence that bees self medicate using nectar and pollen from specific flowers, even utilising some fungi.  The varroa mite (Varroa destructor), a parasite that feeds on  the bodily fluids of bees and their young and spreads diseases such as deformed-wing virus, has been shown to be present in lower levels in hives that are left undisturbed.  It is certainly true that, so far, our bees seem to be free of both varroa and disease.

The phone rang, early on a Saturday morning.  ML spoke to a gruff gentleman who told us he had our bees, and we could collect them.  The breeder sends out lorries, full of bees, across the whole of France, where the boxes are deposited at collection points to await their new keepers.  Our collection point was an hour away, so we jumped in the car and headed off, still slightly bleary-eyed, nervous, excited.  We had talked of this day for a year now, and here it was, here they were – bees.

We arrived at the collection point, which turned out to be the basement of a house.  The gruff gentleman, still gruff, took us in to a room where there were around two dozen small wooden boxes, all a-buzz with the sound of wings.  He handed us our swarm, contained in one of these boxes; 10,000 bees and a can of sugar syrup to keep them fed on their journey.  The queen came in a separate small plastic cage, accompanied by three attendants (she cannot fend for herself at all) and a small piece of candy as a travel snack.  We signed for the package, bid a (gruff) farewell to the gentleman, popped the box and the queen-cage in the boot, got in the car, and stared at each other as the car filled with a loud, low vibration.  Then we pootled off in the early morning sun, an hour down country lanes with a boot full of bees.

We had prepared our hive (a Warré type) by carefully running lines of beeswax along the bars at the top, in hope that the bees would use this as a template for their honeycomb.  We had sanded the wood of the boxes to remove any small splinters and rough edges.  We had applied a couple of layers of linseed oil against the elements, and had rubbed the inside of the whole thing with grass to make it smell more ‘natural’, less of nervous human.  We sited it in the field, and I made a windbreak by weaving together branches from a friend’s English lime tree that he had given us last year after pruning. We planted flowering herbs, sunflowers, and pots of other blossoms. We’d live here, we thought, and hoped the bees felt the same; there is a danger, in the first couple of weeks, that the swarm will decide this is not the place for them, and disappear.

The weather was far from ideal – rain and wind had arrived.  When we got home with our buzzing box, we decided to wait for a break the clouds, if it came.  I sprayed the outside of the package with sugar syrup to make sure the bees would not starve (they had likely finished the syrup in the can), and thousands of tiny tongues began to lap at the mesh of the cage.  I placed the box, and the queen-cage, in our pantry, which is dark and cool and would keep the bees calm.  A while later the sun was peeking, the time had come.

There are a couple of ways to hive a swarm.  One is to empty the bees, by banging the box, on to a ramp that leads up to the hive entrance.  The bees then (in theory) march up the ramp and into the hive.  Another is to open the hive and pour the bees in directly. Both involve placing the queen-cage in the hive first, where the bees, once in, will eat through a small plug of candy to release the queen.  This is important, as the queen is not ‘their’ queen, is genetically distinct, and may be rejected by the swarm if they are not given time to get used to her, to accept her as theirs.  I had thought, being a softy, that both these methods were a bit violent, with danger of squashing a number of bees and angering the others, so we had researched other ways to do it.  One was to simply pop open the package of bees and place the whole thing into one of the hive boxes, put the roof on, and leave it for a couple of days, coming back to remove the package once the bees had made their way out.  This was not possible for us, as the package of bees was bigger than the brood-boxes of our Warré hive.  Another was to place the package underneath a brood-box with a hole in between, sealed so that the bees could move between package and hive, but not out of the hive.  We plumped for this method, feeling (hoping) that the bees were more likely to choose to stay, without the shock of being shaken.  We suited up, two astronauts wandering the the land with a box full of thousands of tiny aliens.  I lit the smoker, working the bellows to produce puffs of cool white smoke.  I popped the lid off the cage, removed the can of syrup, and placed the cage under one of the brood-boxes, a piece of wood between with a hole cut in it to serve as a connection.  And suddenly the air was full of bees.

They had found a way out, the seal I had made was not, in fact, a seal.  A few drops of rain began to fall, and we had to move fast, decide what to do.  The only option left was to pour the bees into the hive, so I banged the cage on the ground (squash) to concentrate the bees in one corner, and I poured, a great stream of wings and legs, and the sound, the sound was immense, almost a roar.  Banging the box again (squish), I tipped more bees into the hive, and the majority of the swarm was now in the brood-box, with others flying in circles around us, above us, landing on our suits, there were bees everywhere. ML placed the roof on the hive, gently brushing away any bees in the way, and I leant the cage against the entrance, hoping any stragglers would make their own way in.

This was not how it was supposed to go.  We had shaken the bees violently, we had squashed perhaps dozens with our clumsiness; vision and movement restricted by our suits.  We were worried that the bees, annoyed, angered by our inept attentions, would leave, seeking alternative digs.  The rain was coming in now, the light slipping away, and there was little else we could do, so we retreated inside, drank wine, waited for the next day and better weather to check the bees, to see if they were even still there.  All this planning, all this investment of money and work and worry, all those tiny lives, all for nothing?

Next time – Part Two: Tea With the Queen.

1 reply to The Hive, Part One: A Boot Full of Bees.