Well, we’re certainly not going to be bored.

We bought the farmhouse about a year ago, having been planning to move to France for a good few years now, furiously working and saving and saving and working.  We moved from Bristol, UK, which was a great place to be, and our jobs afforded us the time to plan, to learn, and to experiment with growing our own food, foraging, baking bread, brewing beer and wine, fermenting vegetables, curing meats, generally anything that will help us become as self-sustaining as we can on a limited (i.e. no) budget.  It’s a big move, and not a little daunting.

ML (my partner) is French, and from the area, which is certainly an advantage as my French is still a little, shall we say, limited.  I can understand about 70% of what’s going on.  But, honestly, I only ever understood about 72% of what was going on when we lived in the UK, so not too much of a change there.

The farmhouse is an old building, until recently a working cattle farm. (Most of the farms around here are – the famous Charollais cows are everywhere – boeuf Bourguignon, anyone?)  It has around two acres of land, and several outbuildings.  We bought it in a bit of a whirlwind, so I am pleased to report that, having been in for a week, I do actually like it.  Phew.

We knew there would be an amount of work to do on the house, which, although habitable, needed a new septic tank (how romantic), and some new rendering at one end of the building.  Since moving in we have discovered we also have heating issues, plumbing problems, woodworm, and wasps nests.  So we are now awaiting quotes to see how many of these we can afford to ignore and hope they’ll go away.

We bought a car (a Renault Clio, so we are perfectly camouflaged on the French roads), and a cat (Mrs. Badcrumble, who we pick up next week so she can tackle the coypu – basically a giant aquatic guinea pig – that live in the many ponds and watercourses that surround the farm).

Our furniture has arrived and, after four days of hoovering up cobwebs, we are at some semblance of a home.

The fun really started yesterday.  ML’s dad and a chap called Maurice arrived in the morning to help us install a pump in our well.  Most of the houses here have a well.  Ours is stomach-churningly deep – around twelve metres down to the water, which is one-and-a-half metres deep.  Needless to say one of my first purchases was a padlock for the well door, and I have a habit of shouting at anyone who strays too close that they are about to die.  I’m sure I’ll shake it off.

Maurice, it turns out, is a water-diviner, and showed us how he uses a pendulum to find water.  Whilst he did this he got both ML and me to hold his hand to see if we had the gift – if the pendulum continued to spin then yes, if it stopped then no.  ML has the gift, it seems.  I do not.  ML had a go on her own, and the pendulum spun, despite ML’s insistence that she was  doing her best to not let it.  My jury is out, but it does appear that there is something of a tradition in the area for water-divining, healing of burns, and the like.  I will find out (and be sceptical of) more, I am sure.

Maurice also dug his own well.  He and a neighbour spent eighteen months digging a hole, fifteen metres straight down, so Maurice must really trust his (neighbour) own water-finding skills (and he now has a working well, so make of that what you will).  I, for one, am glad our own well was already here.

The first pump had a fault, so we got a replacement, and Maurice carefully lowered it, bit by bit, down the well, to the water.  After securing it with a series of increasingly complicated knots, we turned it on and, with an alarming gurgling noise, we had fresh, freezing cold, slightly murky water jetting from the end of the hose.  I felt like we had struck oil, and did a little dance.

We’ll get the water tested next week, to find out if it is drinkable/usable for beer brewing, or just for watering the crops we have planned. 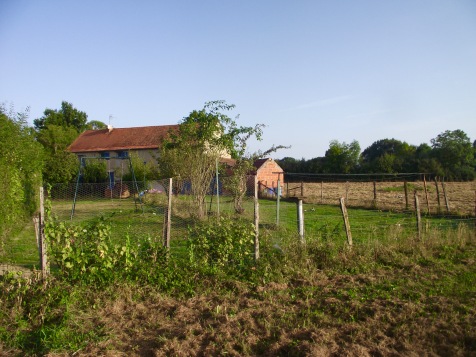 This morning I was up early, and had a gentle stroll around the perimeter of the farm, accompanied by birdsong and butterflies and sunrise and about forty-two million insects.  It turns out that the hedge surrounding us on three sides is almost entirely made up of edible things – blackberries, wild rose, hawthorn, and sloes.  To celebrate this fact, I have decided to make a bottle of Bramble and Bay Leaf Bourbon.  To business, then.

As ever, when foraging, only ever cook with and/or eat something if you are 100% sure that it is what you think it is.  If in doubt, don’t!

Blackberries (Rubus fructosus aggregate) are most peoples’ first wild food.  In season from

mid-to-late summer through to October, purple hands and faces are the de rigueur choice of attire when picking, with scratches to hands and arms optional.  Pick the ripest, fattest berries that you can, and try not to eat them all before getting back to your kitchen.

Hawthorn (Crataegus monogyna) produces leaves, blossom, and berries (haws), which are all edible.  A friend gave me a taste of a liqueur made with the leaves and flowers, which tasted like Turkish Delight.  We’ll use the berries here, which are available from August until November.  Again, pick the ripest berries you can for maximum flavour, and watch out for thorns.

Dog Rose (Rosa canina) and Field Rose (Rosa arvensis) both produce rosehips, which can be

used for syrups, sauces, and all manner of things.  If cooking them, be sure to remove the internal hairs (which will irritate your throat quite seriously) by passing the cooked pulp/syrup through a fine cloth a couple of times.  For this recipe we will leave them whole, so no need.  In season from August until the winter, rosehips have some serious thorny armour, so wearing gloves is advisable, and elegant.

To go with your foraging trophies, you’ll also need to buy some demerara sugar (as I am yet to find it growing wild in the UK or France), and some cheap bourbon.  Do use the cheap stuff, as the finished drink tastes nothing like the sum of its parts, and expensive bourbon would be wasted.

Amounts are approximate, feel free to experiment with the ratios.

Remove any stalks and leaves from the blackberries, haws, and rosehips.  Gently rinse in cold water to remove any lingering wildlife and cobwebs.  Leave to dry on some kitchen towel.

Add 1/3 of your mixed berries to a clean 1 litre Kilner jar, pop in 1 of the bay leaves, then add 1/2 the sugar.  Add another 1/3 of the berries, another bay leaf, and then the remaining sugar.  Top up with the last of the berries and the third bay leaf.

Carefully pour in the bourbon to fill the jar.

Tightly fasten the lid, and then give the whole thing a good shake.

Place in a dark, cool, place, shaking once a day for a couple of weeks until you see the sugar has dissolved.

Really, this should be allowed to infuse for six months before filtering through a muslin cloth into a clean bottle, then left to mature for another six months before drinking.  In reality, my batches have never made it to that ripe old age, and I tend to decant after three months and mature for another three.  Perhaps one day I shall have the willpower  needed to get to a finer finished product, and be aghast at my frivolous youthful impatience.

There will be more stories and recipes from the Wild Beehive (for we are named thus) coming soon.

2 replies to Endings and Beginnings. And Bourbon.